What Makes This “Real”? Virtual Reality in Tech

What Makes This “Real”? Virtual Reality in Tech

Two major players, Google and Facebook, are working to create virtual reality tools that can bring VR experiences to the general population. Google’s VR platform, Google Cardboad, uses a cardboard cutout to mount your phone and form a headset. Carboard was first introduced at the 2014 Google I/O developers conference for Android devices and has since been adopted by more than a million users. Meanwhile in 2014, Facebook acquired Oculus, a company working to develop head-mounted VR displays.

(images: thewestsidestory.net and http://www.youtube.com)
At the Google I/O 2015 developer conference, members of the Cardboard development team presented the tool’s various potentials, touching on the use of Cardboard in education, journalism, and sales. They also discussed the less practical application of making it easier for people to have difficult or even impossible experiences like flying or freefalling. 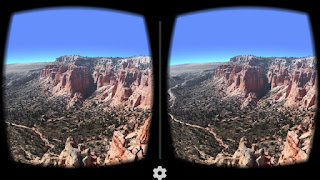 In comparison, at the 2015 F8 Facebook Developer Conference, the VR presentation launched into a talk about our definitions of “real”. Michael Abrash, chief scientist at Oculus, gave a thought-provoking presentation about how our “realities” are formed by input from all of our sensory receptors – vision, hearing, smell, taste, etc. – and are therefore more flexible than we may have previously thought. 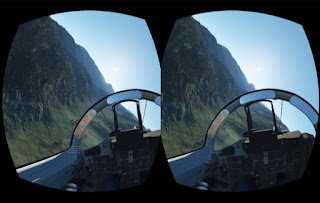 (image: http://www.theriftarcade.com)
Google is challenging developers to begin incorporating Cardboard into their models and apps. With the ability to order Cardboard from a manufacturer or even build their own, hundreds of developers are already building virtual experiences for Cardboard. Facebook and Oculus also have a growing developer community. However, in his talk, Abrash focused more on the need to improve the mechanics of VR itself and less on the ways in which app developers can incorporate the tool into their businesses. He pointed out that we still have a lot to learn about tracking the human body (our own and that of others) and incorporating the outside world into the VR experience. We still lack a deep understanding of many factors that will ultimately be very important to VR.

Despite this fact, VR is on its way. Google, in particular, has hit the ground running in order to bring VR to the general public. These new technologies suggest that the future holds the ability to have any experience with anyone in any location at any time. At that point, what will our realities be?